IRFA: “Their unwavering support and leadership on renewable fuels issues will be greatly missed”

JOHNSTON, IOWA – The Iowa Renewable Fuels Association (IRFA) announced today that three Iowa state legislators leaving their posts in 2014 were honored with the “Lifetime Champion of Renewable Fuels” award for their long, distinguished careers and steadfast support of renewable fuels.

“It’s bittersweet to see these distinguished individuals leave the state legislature after long, successful careers, and we wish them nothing but the best in the future,” stated IRFA Policy Director Grant Menke.  “Their unwavering support and leadership on renewable fuels issues will be greatly missed, and we sincerely thank them for their enduring accomplishments.”

The Lifetime Champion of Renewable Fuels awards were given to:

State Senator Daryl Beall of Fort Dodge, Iowa. Sen. Beall was an enthusiastic supporter of renewable fuels who worked tirelessly to promote ethanol and biodiesel both inside and outside the state legislature. 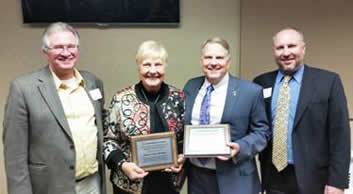 State Senator Hubert Houser of Carson, Iowa. Sen. Houser was also instrumental in passing the framework of today’s renewable fuels policy in Iowa, and was active in the creation of Southwest Iowa Renewable Energy (SIRE), an ethanol production facility in Council Bluffs, Iowa.