JOHNSTON, IOWA – Following the harvest of a small corn field near Quad Country Corn Processors, the ethanol plant recently seeded it once more, only not with corn but with milkweed.

Board member Alan Bennett conducted a dormant seeding of native grasses, milkweed, and other plants that attract pollinators on this one-acre plot as part of the ethanol producer’s plan to establish a Monarch Fueling Station. The mixture was provided by the Ida County Pheasants Forever and contained a special emphasis on milkweed plants, the only plant monarchs can lay their eggs on.

“With this seeding, we are one step closer to establishing habitat for Iowa’s monarch butterflies and other important pollinators,” Bennett said. “We look forward to spring when we hope to see native grasses starting to grow.”

Iowa Renewable Fuels Association Habitat Establishment Coordinator Kevin Reynolds helped the ethanol plant begin the process earlier this year. He said while it will take a couple of growing seasons for the plot to become fully established, this is an important first step.

“Iowa’s biofuels producers like Quad County Corn Processors are already doing great work every day to benefit Iowa’s economy and environment,” Reynolds said. “As more and more plants are engaging in the Monarch Fueling Station Project, they are going above and beyond to help Iowa’s environment in a new way, by boosting the habitat for the monarch butterfly and other pollinators.”

The Monarch Fueling Station Project was established by the Iowa Renewable Fuels Association (IRFA) in partnership with the Iowa Monarch Conservation Consortium in December 2017. It is a program to help Iowa’s ethanol and biodiesel plants establish monarch habitat on plant grounds. To learn more about the IRFA Monarch Fueling Station Project, contact IRFA at info@IowaRFA.org or 515-252-6249. 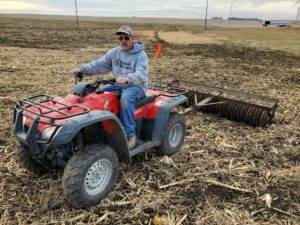